If you’re an American of a certain age, you’ve likely been made aware of a host of anti-aging products on the market today, each claiming an ability to turn back the figurative clock. Some promise to erase wrinkles with the application of a simple cream, while others vow to tighten problem spots with a dedicated regimen of serums, techniques, and exercises. Most enticing, however, are the products promising true anti-aging benefits that may actually add years to your life.

True Anti-Aging Has Nothing to Do With Moisturizers

For most people, information about anti-aging products comes primarily from television and magazine ads touting a more youthful appearance. However, the scientific definition of anti-aging refers to the process of slowing, stopping, or even reversing the process of aging in all your body’s cells. Since aging negatively affects cells, preventing them from functioning correctly and keeping your body working as it should, anti-aging medicine aims to minimize the cell damage that occurs as a result of the environment, stress, disease, and the natural effects of the years as they pass.

A healthy body typically features a coherent brain, exceptional memory processing, an optimal immune system, strong muscles, sturdy bones, and well-functioning organ systems. As we age, each of those pieces become less and less efficient. The purpose of anti-aging medicine is to maintain or regain total overall health — as well as longevity — regardless of advancing age.

Age’s Effects on a Cellular Level

Over time, cells undergo multiple chemical processes of aging — namely, oxidation, glycation, and methylation. During oxidation, unstable compounds known as free radicals can lead to cell damage and interact with other compounds to produce harmful chemicals. Through glycation, these chemicals attach to and negatively affect mitochondria, proteins, and DNA. Subsequently, DNA linked to other chemicals and lacking sufficient methyl groups cannot continue to produce generations of new DNA for future cells, and cell regeneration comes to a halt. If your body can no longer produce new, healthy cells to continue to maintain its tissues and functions, aging and eventual death occurs. However, anti-aging supplements work toward restoring functional proteins and DNA or utilize antioxidants to prevent the oxidation that begins the process. One of the most effective anti-aging molecules found to date is nicotinamide adenine dinucleotide, or NAD.

What Does NAD Do for the Body?

NAD is a coenzyme found in all cells and intimately linked with cell metabolism. It exists in two major forms — NAD+, which is the form of NAD that is available to serve all its functions, and NADH, which is the form occupied by electrons and unable to work as needed. NAD+ helps turn the nutrients we eat into adenosine triphosphate, or ATP, which is how cells exchange and produce energy. Further, NAD+ has recently been identified as a molecule that plays a role in human sleep cycles, as well as feelings of hunger. This circadian rhythm determines when you feel tired, when you feel awake, when you’re most active, and the pattern with which all of these feelings emerge. Proper NAD production both depends on and influences circadian rhythms and determines to what extent NAD+ interacts with proteins known as sirtuins. Together, NAD+ and sirtuins perform essential cell processes such as:

The Body’s NAD Supply Is Finite

Once NAD+ interacts with sirtuins to ensure cell health, it gains electrons and is unable to continue providing additional benefits. Therefore, the body must continuously produce NAD to continue multiple cell processes and prevent cell deterioration. Unfortunately, as we age, our bodies produce less and less NAD.

Diminished NAD affects the body in multiple ways. First, less NAD reduces the cell’s ability to make and utilize ATP energy, which in turn diminishes its ability to perform its function within the body. Second, as a cell finds itself less and less able to produce other functional molecules that support cell health, it will die much more quickly. In these ways, NAD has proven itself to be essential to maintaining proper neurological and organ health; without it, the human body ages and decreases in function.

How Can a NAD Supplement Help?

Ever since scientists isolated depleted NAD levels as a potential cause of multiple age-related illnesses from osteoporosis and arthritis to cancer and Alzheimer’s, researchers have posited that perhaps continuous replenishment could work to prevent these diseases. As a result, animal studies involving the restoration of NAD to aging mice and rats commenced.

In these studies, researchers added NAD directly to some of the cell cultures, returning the aging mouse cells to NAD levels of younger mice. Then, the cells were exposed to the traditional stresses experienced with age, including oxidation. It was found that much fewer of these cells died than did those in the control group not treated with NAD, leading researchers to conclude that NAD enabled cells to withstand stress and avoid the mechanisms of cell aging.

Disclaimer: Some links on this page are affiliate links that may save you a bundle OFF normal pricing due to select partnerships. This adds ZERO cost to you, and can only pass potential savings. We may receive a commission if you make any purchases through these links. It’s a win-win! See our full disclaimer here. 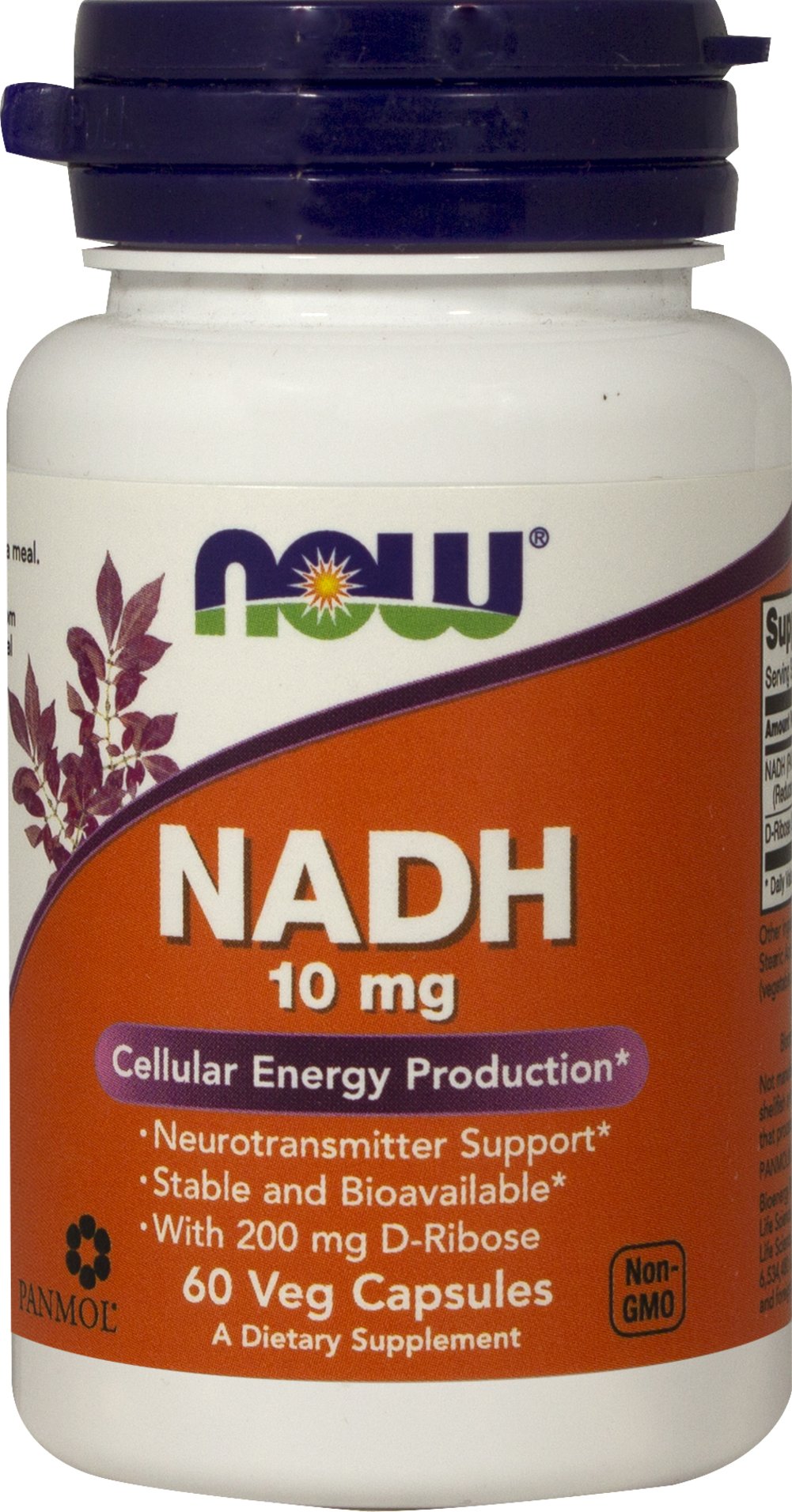 NADH from NOW Foods
NADH (Reduced Nicotinamide Adenine Dinucleotide) is a coenzyme found in all living cells that is derived from Vitamin B-3, also known as Niacin. Although NADH is normally unstable outside the body, PANMOL NADH uses a patented pending process to naturally preserve its effectiveness, thereby delivering stable and bioavailable NADH to the body.

How Is NAD Used?

Obviously, most people don’t have access to labs, cell cultures, and the necessary tools, which makes NAD supplements the primary way to increase cell NAD. Fortunately, NAD supplementation offers an option for people to improve their memory and focus, sleep better, and boost their metabolism without the need for a lab in the basement. It has taken time to develop an oral supplement that compares with the body’s natural production.

What Is a NAD Booster?

While the importance of NAD+ to the body’s is clear, it appears that simply supplying the body with more NAD via oral supplement or the bloodstream should be the first step – not the final one. With the understanding that, over time, these supplies of NAD are depleted in the same manner as the naturally occurring NAD, supplementation options become a crucial component to gradually increasing NAD.

Because of this gradual decrease, researchers once again looked within the cell in the hopes of identifying the metabolic precursors to NAD. Supplementing these precursors could, theoretically, boost the body’s natural NAD production by providing additional biosynthetic pathways to dramatically increase cell metabolism and its eventual benefits. Eventually, two strong precursors of NAD biosynthesis emerged — nicotinamide riboside (NR) and nicotinamide mononucleotide (NMN).

The first question researchers asked themselves was “Is nicotinamide riboside the same as NMN?” They found that NMN actually transforms into NR, which enters human cells first, and is then converted back into NMN and eventually NAD. Thus, the question regarding which precursor makes the better NAD booster has long been subject to debate.

NAD3 – NAD+ Booster
There is no arguing that boosting NAD+ levels brings an array of health benefits like better focus and memory, better sleep, more energy, and a faster metabolism. But every other NAD+ booster out there is missing to address one major issue – inflammation. NAD3 addresses and corrects this problem, naturally. NAD3 suppresses the NLRP3 gene, a protein known to cause inflammation. By suppressing it, NAD3 helps prevent and protect your body from from this issue. If you’ve had another NAD+ booster in the past, this is definitely the next step.

What Is NMN Good For?

Current research shows that this transformation between NR and NMN must take place for entry to a few cell types. This leads researchers to believe that NMN is, in fact, one of the quickest means of stimulating NAD production. However, NMN supplements are also proving to have their own anti-aging benefits beyond those of NAD production alone.

In addition to the NAD metabolic pathway, NMN can be added directly to cells without converting to NAD. This phenomenon is made possible by newly discovered transport proteins that increase in number after NAD levels drop off. In this form, NMN contributes to cell energy and allows each of the previously mentioned anti-aging properties promoted by cells with adequate ability to grow and regenerate.

Choosing to supplement with NMN along with NAD provides a much more direct path to promoting cell metabolism and is thus a much quicker means of doing the same. In addition, NMN has been found to improve insulin activity and production, resulting in additional metabolic benefits as well as glucose tolerance. In particular, NMN supplements can help work to alleviate metabolic conditions like diabetes, fatty liver disease, and obesity.

How Do I Increase My NAD Levels?

NAD’s deep ties to the very processes that keep our cells from aging and dying too quickly have, predictably, led to a great deal of research regarding how to increase overall NAD+ levels. Alternative ways to increase production include: Unfortunately, a high fat-diet may not be advisable if you have diabetes, heart disease, or increased LDL cholesterol. Similarly, fasting may not be advisable for those with medical conditions and is often difficult to continue over time. Thus, supplementing with NMN powders or other NAD supplements is often the safest and most convenient way to promote the increased production of NAD. While the Fountain of Youth remains a fantastical myth that isn’t likely to come true any time soon, the science behind anti-aging medication continues to advance. Perhaps one day, you’ll be able to take a miracle pill and experience life as a young adult once again. Until then, NAD and NMN supplements offer real benefits to slow the drastic effects of cell aging on the human body

If you’re interested in grabbing a supply of NAD or NMN supplements check out the recommended brands on this page. You’ll be happy you did!